Mark McDonald has a formidable reputation within criminal law. He specialises in criminal defence and has experience across all offences.  Mark has led in a number of trials involving serious offences.

Mark is regularly instructed in cases involving murder, serious assaults, rape, organised crime and Terrorism.  He is known for the thoroughness of his preparation, providing clear and concise advice to clients and in particular for his ability to get on with clients. He has considerable experience of dealing with defendant’s with profound psychiatric and psychological issues.

In 2007 Mark founded the London Innocence Project, a non-profit legal resource clinic.  The project worked to exonerate the wrongfully convicted by examining their cases and subjecting both the evidence and the trial process itself to close scrutiny.  Mark led a team of barristers and bar student volunteers committed to providing high-quality legal representation to those who maintained their innocence.

Mark helped set up a UK based group, Amicus which became a leading charity working on the death penalty in the USA.  As a Trustee he created a training programme on US criminal procedure and constitutional law enabling the organisation to send hundreds of lawyers to the US to help assist the representation of inmates on death row.

Mark spent some time working in Palestine with the Bar Human Rights Committee and on return set up Labour Friends of Palestine and the Middle East. The group is now one of the largest and most influential in the Labour party. He has debated at numerous universities on the middle east, he has lectured, chaired events, written articles in major newspapers, appeared on the BBC, Sky, the Today programme, CNN and many other main steam news agencies. Mark also stood for Parliament at the last general election in 2019.

Mark has produced numerous briefs and documents that have been submitted on behalf of defendants in the UK and, through his work with Amicus, in the USA and international tribunals.  He has been involved in a number of campaigns that have led to Early Day Motions being tabled in Parliament and I have lobbied Members of Parliament, Cabinet Ministers and the Prime Minister.

Mark has worked across the political spectrum on a number of issues including human rights in the Middle East, the Godard Independent Inquiry into Sexual Abuse and campaigning for the Human Rights Act and the abolition of the death penalty. He has also appeared before the Privy Council representing inmates on Death Row in Jamaica and Trinidad.

In 2009 Mark was the minority pro bono lawyer of the year.

Mark in an advocacy trainer for Lincoln’s Inn and was one of the first to teach the Vulnerable Witness Training Course.

Mark is also a Bencher at Lincoln’s Inn.

R v Otway 2011 EWCA Crim 3 – Appeal against Conviction for murder (use of evidence from a Podiatrist for the purpose of Identification and joint enterprise).

R v Onyeabor – Appeal against conviction for serious drugs offence (summing- up in 19 minutes for a 16 day trial) was unlawful. 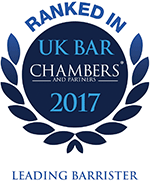